Posted in Music | No Comments »

I just got my invite to Google Music just a few minutes ago.

I created my account then installed the software on my PC and my phone.  The PC software scanned my music folder and started to sync my songs to the great Google cloud, and now (10 minutes later), I’m listening to the music collection I’ve collected over the years streaming to my phone.

You can activate up to 8 devices on a single account.  Very cool stuff.

I think it will sync your iTunes library too … but I wouldn’t know because iTunes is the most evil piece of software ever, and I refuse to use it.

how i made my samsung fascinate not suck

Posted in Android | No Comments »

Last week, I got a new Samsung Fascinate (Verizon’s Galaxy S phone).  It was the free phone at Best Buy, and it was time to add a new line to the family plan.

On the surface it’s a decent enough phone, and the hardware is great.  Sure, it’s not a 4.3″ screen with a dual core 1.2Ghz processor, but for last year’s model it’s nice.  The big problem with this phone is the software.  Here are the big gripes that I and others have with this phone:

Out of the box, my it took 3-5 minutes to get a GPS fix (completely unacceptable).  Once I got a fix, it was accurate within reason; however, others have reported that their accuracy was way off with this phone.

I’m not sure why, but an app from the Market fixes the problem all together:  GPS Status & Toolbox

Once I installed this and ran it, I was getting a GPS fix in 5-10 seconds.  I don’t have a clue why this works, but it did for me.  Your mileage may vary; in any case, it’s a very cool little app to have.

Any UI is subjective, but there seems to be a general disdain for Samsung’s TouchWiz interface.  I personally could have lived with it, but I was not a fan either.

I had never used LauncherPro before, but I’m pretty sure it might find its way onto any of my future Android phones.  It allows you to customize your homescreens, doc, app drawer, and a ton of other things.  Very nice, and it got rid of 99% of all the TouchWiz annoyances.

This isn’t really Samsung’s fault, but Verizon has felt the need to have Bing as the default search engine and map provider on the Fascinate.  There’s really no way to change this, but installing Google’s Search and Maps goes a long way.  May others have changed their browser home page to google.com, but I haven’t felt the need.  I just put the Google Search widget on my homescreen, and I’m good to go.

In the original phone (with Android 2.1), you could not download and install Google Search.  However, since the Froyo update last month, it’s no problem.  I’m not sure how long you’ll still be able to buy one of these phones new, but mine came out of the box with Froyo.

But, after all this, the Search button on the phone still uses Bing … Oh well.

Verizon Navigator is the default (and unchangeable) navigation program on the phone.  The icon on the Car Dock screen will ALWAYS open VZW Navigator (making this screen basically useless).

Get the Google Navigation app from the Market and put a shortcut on your homescreen.

I don’t think I’ve ever seen a phone with this much useless software preinstalled.  You can’t remove it, but at least with LauncherPro (above) I can hide the icons from the app drawer.

So, contrary to popular belief, it is possible to make the Fascinate tolerable (even likable) without rooting and custom ROMs.  I don’t know that we’ll ever get Gingerbread, but for now I’m happy.

how many fingers am i holding up?

Last night, me and the boy were watching a show on National Geographic called “Known Universe“.  This particular episode was all about the infinite nature of the universe and the possible existence of the multiverse.

It reminded me of a conversation we had driving down the road a week or so ago:

The Boy:  “Hey daddy, how many fingers am I holding up?”

Me: “3?” (knowing it was a trick question somehow)

Me:  “Well assuming that there are infinite universes, that our universe is infinitely big, there exists infinite numbers of parallel dimensions, or any combination of the above … I, and all of the infinite other me’s, are possibly holding up an infinite number of fingers … Regardless of the fact that the ‘me’ currently occupying this portion of time/space is only hold up a single finger.”

The Wife:  “I have a single finger for you…” 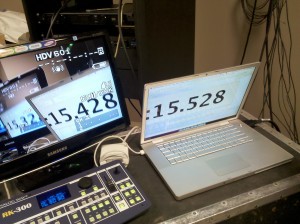